Differentiation Formula: In mathematics, differentiation is a well-known term, which is generally studied in the domain of the calculus portion of mathematics. We all have studied and solved several problems in our high school and +2 levels. 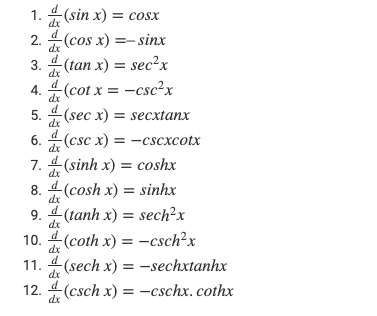 In the language of laymen, differentiation can be explained as the measure or tool, by which we can measure the exact rate of change. For instance, you can figure out the rate of change in velocity, by the time for the given number of functions.

Well, if you are a math fanatic and want to solve several questions based on differentiation, then here we will help you with it.

We will discuss the systematic formula of differentiation by which you can determine the rate of speed for such function.

Differential equations can be divided into types which name are — 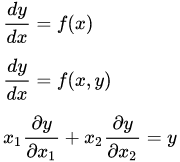 Well, differentiation being the part of calculus may be comprised of several problems and for each problem, we have to apply a different set of formulas for its calculation.

So, if you want to have a solid grip and understanding of differentiation, then you must be having all its formulas in your head.

Here below is the list of several Differentiation formulas starting from the basic level and going to the advanced stage.

The derivative of the Exponential and Logarithmic functions

Well, as we know that calculus is based on purely scientific calculations, where you have to apply a certain formula, to get the solution to a certain problem.

Similarly, you will encounter several problems in differentiation, for which you will be needing its specific formula to get the right answer.

There are several formulas in calculus and you have to apply the right formula to the concerned differential problem. We urge you to practice all the above-mentioned formulas to get better at solving differentiation problems.